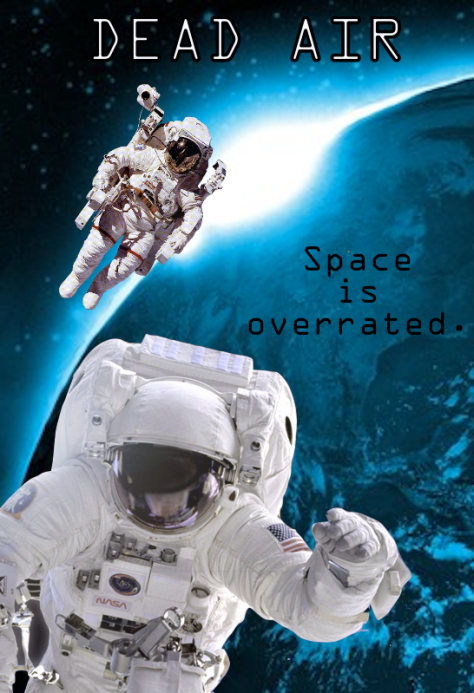 the incredible true story that inspired the motion picture “Gravity”

I don’t know what all the fuss is about.

But it’s not like you can eat it or take it to the movies.

Before going up there, even I had that misguided “isn’t space grand?” attitude. I guess you never know what’s waiting for you behind the curtain unless you actually are the curtain, or something to that effect. I don’t know why I kept going back up there, maybe I just really like that diarrhoea-style space food, maybe Earth just doesn’t do it for me.

Now as to why she went up there… that’s a whole other mystery altogether.

Medical doctors with daughter issues have no business being in zero gravity settings. I learned that the hard way.

I always knew she was trouble, the minute I saw her. She had that look. You know that unconfident, sweaty, eyes-darting-left-and-right type of look? “How she passed the psychological evaluation I’ll never know…”, I thought. It seems silly now but how could I have known?

Sure, NASA isn’t exactly known for its overall incompetence but, every so often, mistakes slip through the cracks, even in the most professional and together of places. It happens. I should have known better but her making it up there, I suppose, wasn’t completely unfeasible.

I was assigned to supervising repairs on Explorer, she was working on the Hubble when mission control warned us about debris hitting us and that’s when I saw it. A look in her eyes I’d never seen before. Her edgy desperation had suddenly opened up the door to something much more knowing, much darker. Without hurry, there she remained, seemingly continuing repairs as debris started hitting us but really doing their bidding.

Before getting “accidentally” knocked off out of danger and into the dark chasm of space, I saw her neatly place a metallic item on the skin of the shuttle. It was like some kind of spinning cylinder with blue blinking lights shining all around it. Something not from our world. This is when I finally understood that what was happening to us was no accident.

Luckily, I had my thruster pack handy: stupid thing saved my life.

He was one of our key engineers, the man had a family and a positive (read: naive) outlook on life. He was a good man and she killed his face, just like that. That device she planted on Explorer before floating away was clearly emitting some kind of magnetic field leading the debris to the shuttle. Shariff was almost at the airlock when part of that satellite hit him.

Can’t believe we were pinning this debacle on the Russians.

So there I was, at a somewhat safe distance from the disaster. Shuttle’s down, she’s floating far out. I had two options: find a way out and get back to Earth or get to her and find out why she did what she did. THEN get back to Earth.

I decided to get the bitch.

Seeing as she was probably programmed or hypnotised to do these things, I would find her, find out the truth, her plan, and deal with her accordingly.

When I found her, she was hysterical: breathing loudly and wasting oxygen. Her real, cowardly self had resurfaced and I had to calm her down in order to reach deep and find what else was lurking inside her psyche. There wasn’t much time to get the both of us over to another structure.

She told me about her dead daughter.

Can’t listen to good music in space, these days.

Anyway, we just about made it when the debris came back, knocking me away unexpectedly. That bitch had once again called the debris towards us: she must have been onto me. She knew I suspected her.

That’s when I got the idea: fake my own death and bring her down another way.

She was holding my hand, pretending to save me. I let go.

What she didn’t know was that my thruster pack still had plenty of fuel. I would make my way to a nearby Chinese satellite, where she would no doubt be heading, and set a trap for her.

It took some time but I finally made it. The people there were good people. They were on their way back to Earth when I warned them of a possible impending attack on our world by an unknown force. I flipped the oxygen switch down without them noticing, waited for them to get dizzy and, eventually, they believed me. We devised a plan: they would take the first escape pod down and warn the authorities, warn NASA, and I would hide and come back down with her.

Soon after the Chinese astronauts had left, she finally made it and, luckily, didn’t notice me hiding under the pod. I saw her sneak in, try to communicate with an Earth base and that’s when it happened.

Well, seemingly like a dog but it was much stranger than that. Much more disturbing and high-pitched. She turned off her oxygen completely and closed her eyes. Suddenly, she re-opened them and I saw like a mist pass over her blank gaze. Over the pod, something crazy happened.

Yes, I saw three dogs with spinning blue collars, floating in bubbles and communicating with her from the outside. What they were transmitting sounded like co-ordinates. They were planning an attack! I knew it!

The space dogs barked, she barked back, I listened.

After a couple of minutes, they floated away. That’s when I realised that my thruster pack was running completely out of fuel. I had to make it inside the pod, somehow. Luckily, she was still unconscious so, if I acted fast, I could open the pod, sneak inside, hide and make sure she didn’t see me when she woke up. Which is what I did. I was afraid for a moment when she blindly opened her eyes but, thinking fast, I pretended to be a ghost, knocked her out and hid inside the pod, right at the back.

She woke up and turned the oxygen back on. Thank God for that.

As if overwhelmed by a new sense of lust for life, she followed the procedures to get back to Earth and so we did. We almost burned-up on re-entry and I almost drowned when we landed but I had taken off my space suit as soon as we did so sneaking out underwater after her was easy. I even pushed a frog towards her in order to send her in a different direction.

Popping up over the water to breathe every so often, I eventually saw her stand and walk away.

Just then, the authorities arrived: the Chinese astronauts had followed my instructions! She was instantly apprehended, given a strong sedative and taken back to NASA headquarters. I, of course, followed.

What they found was staggering.

Testing revealed a small but significant bone-shaped substance inside her brain. It was carefully removed and analysed. Apparently, the substance contained a highly concentrated dose of nuclear energy. The space dogs’ plan, then, would have been to turn us all into skeletons, invade the Earth and feast on our bones. They led her into space in order to psychically impregnate her head with this powerful weapon as, from their far distance, they could only hypnotise her.

The barking, the sudden change of emotions, the hysterical mood swings, the incompetence, it all makes sense now!

Unfortunately for her, by removing the substance, which had reached deep parts of her brain, she was left with a limited amount of capabilities. Essentially all she could do from now on was get on all fours, bark and eat doggy treats. To this day, she still resides at our NASA kennel. She’s happier than ever and I go feed her biscuits once a week.

It’s like something out of a bad movie or something…